We've all heard of the history of the PayPal Mafia.

The PayPal Mafia refers to the company's original team, which is made up of an extraordinary group of entrepreneurs like Peter Thiel, Elon Musk, Reid Hoffman, Steve Chen, David Sacks and many more former employees who have generated a multiplier effect on the ecosystem by investing in the next generation of entrepreneurs and creating successful businesses that we now recognize as YouTube, Tesla, SpaceX, LinkedIn and Yelp, among others.

The story of a company that spawns a group of entrepreneurs whose culture of innovating and building an industry from the ground up has a multiplier effect on the entrepreneurial ecosystem and economy isn't just reserved for PayPal or Silicon Valley. In fact, there is one clear case in Mexico City: Linio.

The first Endeavor Review “The Multiplier Effect of & # 39; Linio Mafia & # 39; One Mexican Company ”examines the influence and multiplier effect of the Linio team on the development of the e-commerce ecosystem for entrepreneurship in Mexico and Latin America.

The multiplier effect explains how entrepreneurs and business people drive the growth of an industry, sector, or city through investment, mentoring, serial entrepreneurship, and businesses created by former employees.

With the support of the new headquarters of Rocket Internet Mexico, Linio opened its doors in 2012 as one of the first players in the e-commerce market.

Before Linio, the general perspective in the industry was that Mexicans didn't like buying online, but for Linio it was a neglected opportunity as there was no adequate platform to buy from and with a wide range of products. As pioneers in the industry, they had to build, develop and innovate. The culture in Linio's team had to match this.

The Linio team needed to create logistics and payment support systems, promote cultural acceptance of e-commerce, and train an inexperienced workforce, which, according to Cordero, García and Noel, represented the greatest impact of Linio and generated unparalleled digital talent.

Bernardo Cordero explains: “One part that is little talked about is the impact (Linio) on the real ecosystem – in terms of payments, logistics and customer habituation to online purchases. Someone had to invest, someone had to open the market, and that was without a doubt Linio. "" 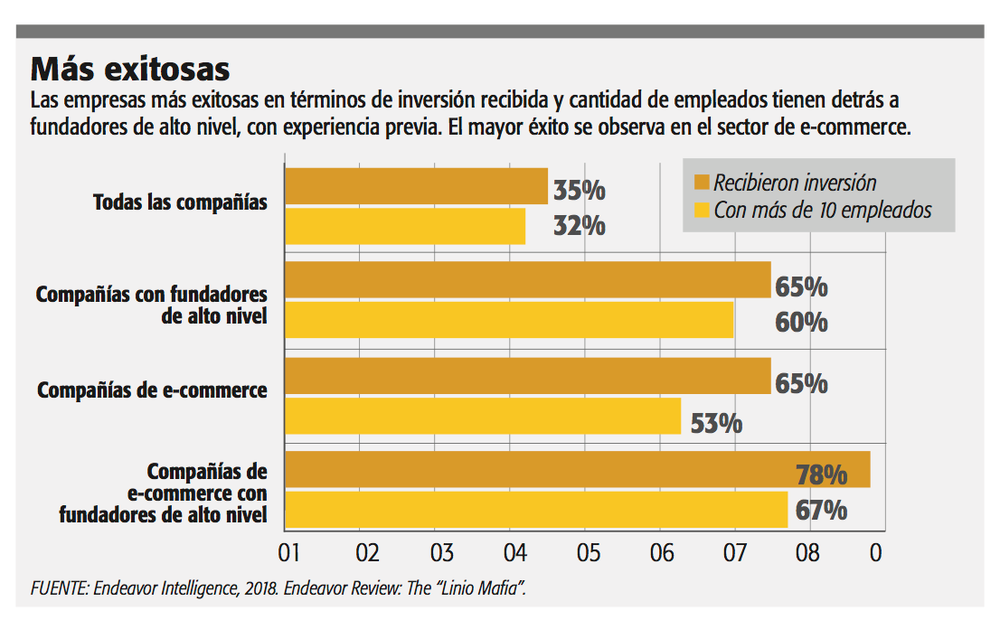 The study identified 66 companies founded by Linio employees or founders in Latin America.

The ventures that the "Mafia Linio" has generated in the ecosystem include e-commerce platforms (Togetherz and Mercadoni), some of which focus on specific industries such as the sale of pet products (Petsy.com), automobiles (Kavak) and Mattresses (Luuna) focus). Others facilitate business processes such as recruiting (Apli), product delivery (CorreoClick), human resources (Worky.mx) ​​and insurance (Covela). A fourth is digital agencies that offer a variety of services related to e-commerce and digital marketing.

Of all of them, the most successful in terms of investments received and the number of people working in the e-commerce sector have been developed by either or both of Linio's founders or executives. Companies with more connections to Linio are also more successful.

Where is the "Linio Mafia" today?

Today we find various success stories of the "Linio Mafia". For example, Ulrick Noel co-founded Everdeen Capital, an investment bank focused on long-term relationships. Bernardo Cordero founded STARTegy Venture Builder, the new company in the fintech sector, and Carlos García Ottati is the co-founder, CEO and chairman of Kavak, a platform that makes it easier to buy and sell used cars.

Kavak is one of the most successful cases of the "Linio Mafia". Carlos founded the company in 2016 with Roger Laughlin Carvallo, former Linio Sales Director. The platform currently employs 150 people, has received $ 16 million in investments, and is part of the Endeavor network.

Another success story is Luuna, which was founded in 2015 with three former Linio executives: Guillermo Villegas, William Kasstan and Carlos Salinas. Luuna causes a disruption in the rest of the industry and stands out for its online mattress sales model. The company employs 44 people and has received an investment of 115 million pesos. You are also on the Endeavor Network. 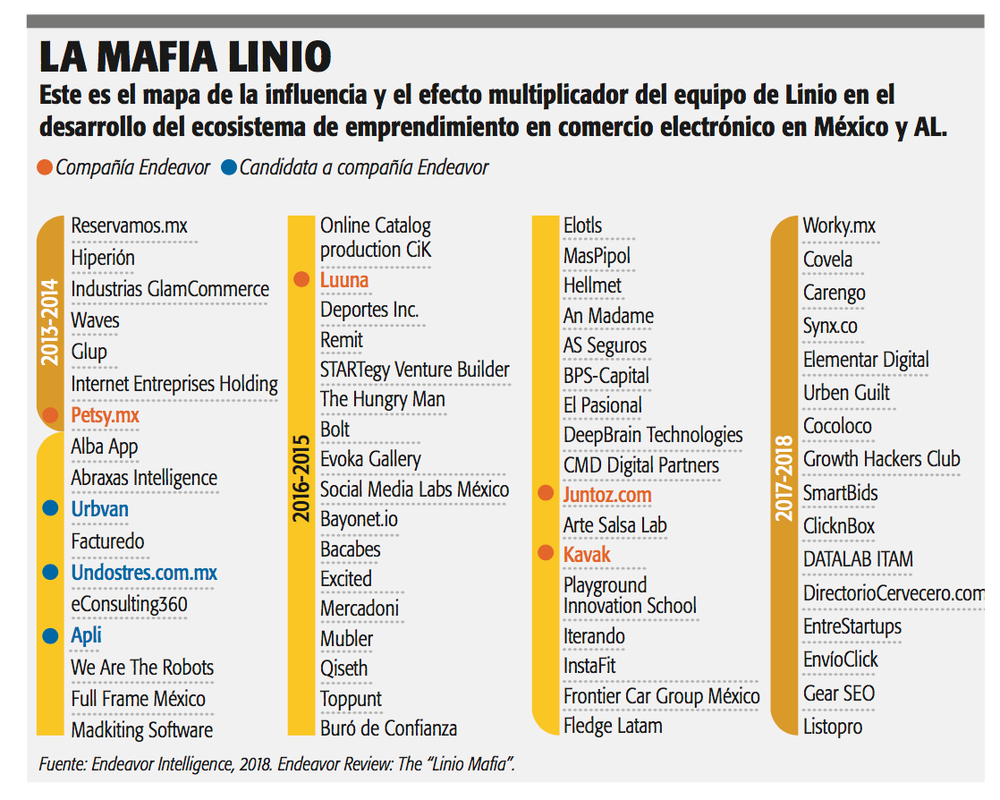 After building the e-commerce ecosystem, the "Linio Mafia" continues to stimulate the growth of the sector both outside and inside its network.

Despite the impressive growth of Mafia Linio companies, some still believe that the e-commerce market in Mexico is just beginning to awaken. Consumers and investors are getting closer and closer to the industry and companies are starting to scale.

Carlos García: “This mafia will keep moving forward. It's just beginning. I believe that in five years we will start to see the flow of this Linio Mafia. "

The Linio case needs to be judged by the impact it is having on e-commerce in Mexico by building and developing teams with a high ability to create and innovate. In this way, a digital talent emerges that pervades the entrepreneurship ecosystem today and creates a network of people who are starting new giving and receiving mentoring to companies who are customers and suppliers and who invest with one another.

Endeavor seeks to apply this multiplier effect to countries, cities, governments, civil associations and international philanthropic institutions interested in promoting the country's economic and cultural development through effective entrepreneurship as the greatest catalyst.

Maintaining a prosperous ecosystem in any sector requires extensive development. Opening up new avenues within the economy requires support structures such as payment and logistics systems, understanding and general acceptance by consumers and allies, and training and the acquisition of experience with professional talent. When You Say There is a Restricted Pool of Black Expertise, Here is What You are Revealing About Your self If you wish to enhance worker satisfaction, do that controversial follow