Bitcoin briefly tumbled to its lowest level in two years on Monday after Bloomberg News reported that Genesis, the digital-asset brokerage and lender, has told investors it could be forced to file for bankruptcy if its current fundraising efforts are unsuccessful.

The price of bitcoin
BTCUSD,
+1.74%
tumbled to $15,615 on Monday after Bloomberg published its report, its lowest level since November 2020, according to CoinDesk.

A representative for Genesis downplayed the Bloomberg report in a statement shared with MarketWatch, which claimed that the company is continuing to have “constructive” conversations with creditors.

“We have no plans to file bankruptcy imminently. Our goal is to resolve the current situation consensually without the need for any bankruptcy filing. Genesis continues to have constructive conversations with creditors,” Genesis said.

Speculation has been mounting in recent days about financial issues being faced by Genesis, which halted redemptions and new lending last week. After the halt, the Wall Street Journal reported that Genesis had until Monday morning to secure $1 billion in financing. Genesis has also publicly disclosed that it had $175 million in exposure to now-bankrupt FTX.

Genesis has several businesses including lending, custody and trading in spot cryptocurrency and over-the-counter derivatives markets.

In recent days, there has been rampant talk in social media about more bankruptcies in the cryptocurrency space following the collapse of FTX. Some crypto industry insiders have been focused on Genesis’ ability to weather the crypto storm, several sources told MarketWatch.

One result of this has been reflected in one of the more popular bitcoin-linked products, the Grayscale Bitcoin Trust
GBTC,
-0.84%.

The widening discount reflects traders’ worries that the problems at Genesis might spill over and impact its parent company, Digital Currency Group, according to Charles Hayter, CEO of CryptoCompare, a company that provides data about digital-asset markets. DCG is also the parent company of Grayscale, the asset manager of the Grayscale Bitcoin Trust.

Bernstein analysts Gautam Chhugani and Manas Agrawal wrote in a Monday note that “crypto investors continue to speculate on a Genesis spillover to DCG and thus, potential strategic options on Grayscale, its most valuable business. Crypto investors also fear indirect reputation damages to GBTC from the recent leverage blow out between Genesis, Three arrows and Alameda.”

DCG is considered one of the crypto world’s “blue chip” companies, along with being one of the most valuable firms in the space, several sources told MarketWatch.

Still, the Bernstein team, along with analysts at Bloomberg Intelligence, have said a Genesis bankruptcy likely wouldn’t impact GBTC or DCG more broadly.

According to Bernstein, Digital Currency Group and Genesis own about 10% of all outstanding GBTC shares, and the company could elect to sell these holdings to meet its liquidity needs. That was equivalent to roughly $560 million as of early Monday, the analysts said, although the market value of bitcoin and GBTC fluctuate. 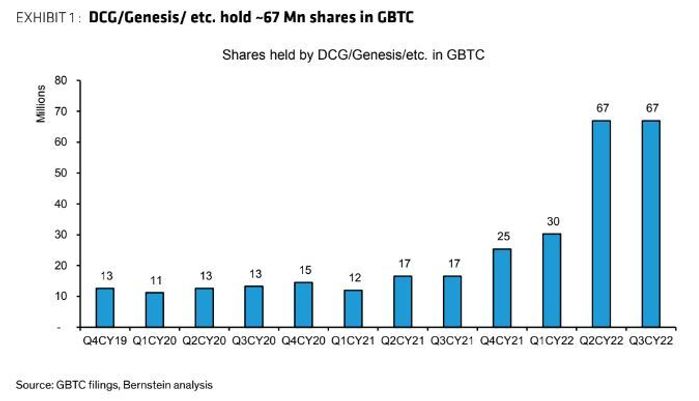 CoinDesk, which is also owned by DCG, reported over the summer that DCG had taken the burden of more than $1 billion that Genesis had lent to Three Arrows Capital Ltd. Genesis was reported to be among 3AC’s biggest creditors.

For years, GBTC traded at a sizable premium to the value of its bitcoin since it was one of the only channels for accredited and institutional investors to gain direct exposure to bitcoin.