For the last several decades, parents have been welcoming their adult children home after moving out for college. It’s become an accepted way for young adults to save up and start their lives off with a little less financial burden, and we’re currently seeing that trend rise as more young adults join the boomerang generation.

The rise of the boomerang generation really began following the 2008 great recession, with 13 percent of 25–34 year-olds living at home in 2010 — a new high according to the census data available beginning in 1960. Since 2011, this number has grown to 17 percent of 25–34 year-olds looking to save money at home. This can be an awkward situation for families to maneuver, but with a proper budget and honest financial conversations, it can be a positive move for everyone.

Learn more about the boomerang generation and how to manage your household with adult children, or check out our infographic for fast facts and tips to improve job prospects after graduation.

Why Are Young Adults Moving Back Home?

Rising unemployment and record-high student loan debt are leaving many recent graduates without resources to cover the cost of living in major metropolitan areas. Some young adults join the over 3 million U.S. households living with roommates, which has risen in popularity by 19 percent since 2007, while others choose to save money by moving back in with their parents, which has grown in popularity by 46 percent since 2009.

The national unemployment rate in April 2020 reached 14.4 percent, up 3.3 percent from the previous year, so recent grads are entering a tough job market. Entry-level salary projections have dropped 9 percent to $54,585 as competition for these positions rises. Additionally, 15 percent of employers plan to decrease their hiring of recent grads, and nearly five percent of college seniors who had received a job offer had their offers revoked following the COVID-19 crisis. Meanwhile, 22 percent of students and graduates looking to gain experience through an internship had their offers revoked. 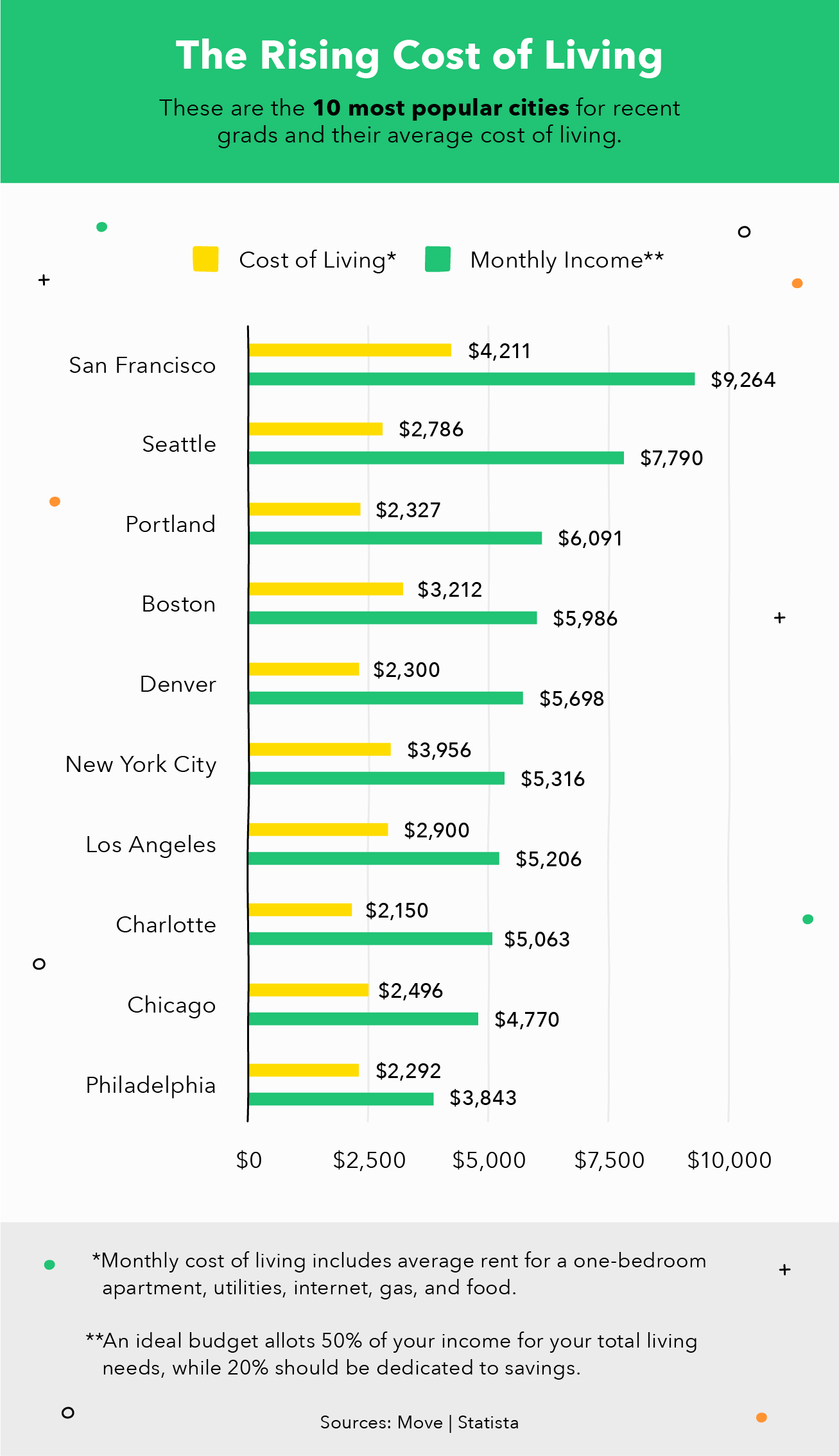 Where Does the Boomerang Generation Live?

Of the 13 most populous metropolitan areas, Riverside and Los Angeles, California have the highest representation of the boomerang generation, with 25 percent and 24 percent of homeowners reporting that their adult offspring live in their household. New York City reports the highest total number of households housing adult children at 1,438, or 19.3 percent of, New York City households. 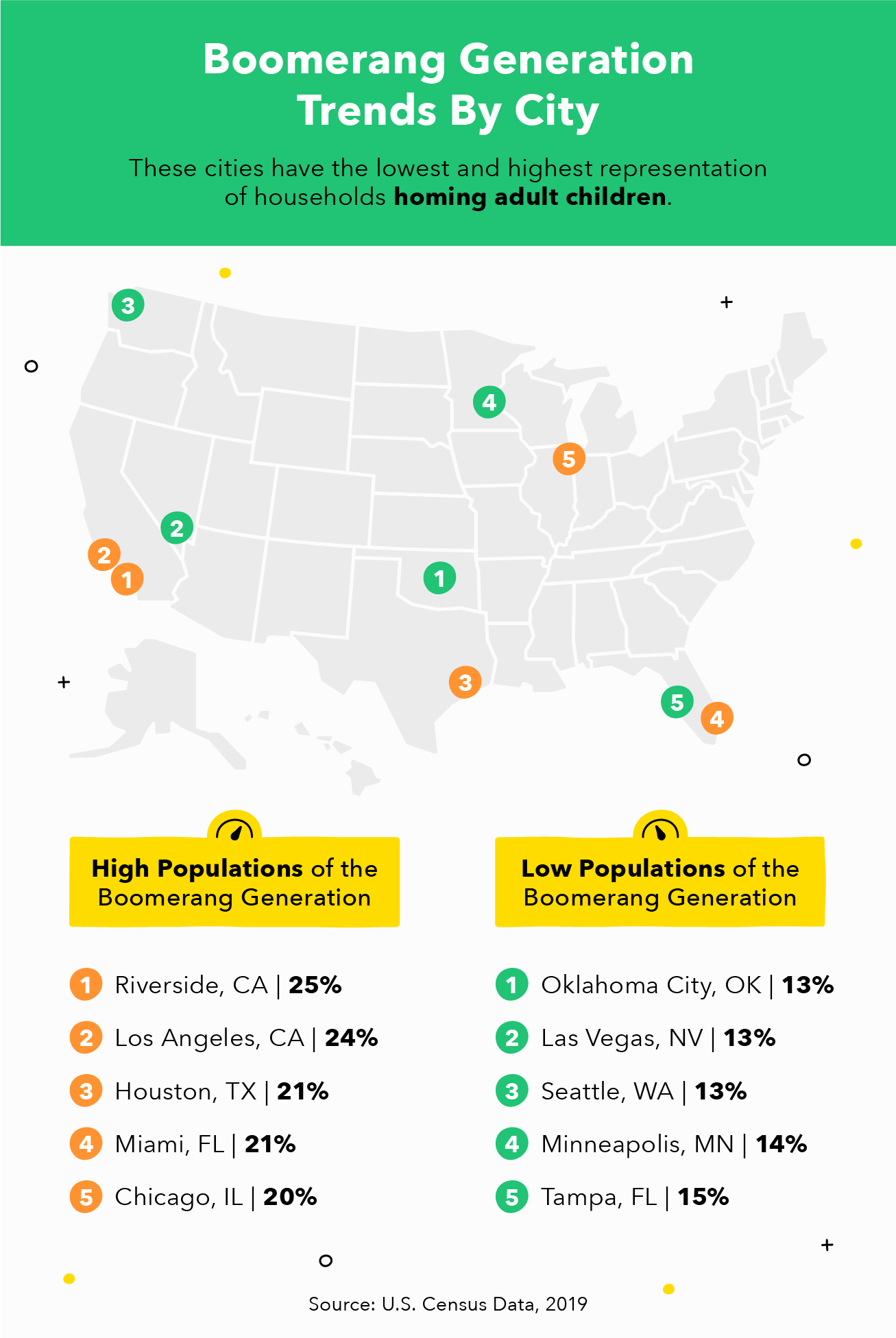 Riverside has the lowest number of households housing adult children of the top five cities but just beats out Los Angeles as the most representative city. The average age of Riverside residents is 30 years old, under the California average of 36. Riverside’s median rent is $1,352, which is 66 percent of the estimated individual income at $24,733 and double the recommended spending for housing.

The city of angels is a top destination for recent graduates, but the cost of living deters many would-be movers at an index of 145.8 — nearly 50 percent higher than the U.S. average of 100. The estimated per capita income in L.A. is significantly higher than what Riverside offers at $33,496, while the median gross rent is comparable at $1,397. The pay may be the highest of the three cities, but the job market is highly competitive with an unemployment rate of 18.5 percent.

Houston offers the best deal on rent of the three cities, with a median cost of $986. Meanwhile, the average income is still higher than Riverside’s at $31,175 and the overall cost of living is just below the U.S. average at an index of 93.5. Still, Houston’s poverty rate is striking with 20.6 percent of residents living below the poverty line.

While metropolitan areas can offer the highest salaries, they’re also significantly more competitive and it’s not common to make six-figures as a recent graduate. So the boomerang generation is choosing to skip roommates and live with their parents. It’s a comfortable and supportive environment that can help young adults save a significant amount of money, and begin paying their student loans.

How to Handle Finances in a Multi-Generational Household

There’s no doubt welcoming grown children back home can be difficult. Both the parent and child’s needs within the relationship and socially have changed, and the relationship has grown significantly. To help you navigate this potentially awkward situation and prevent conflicts, you need to work together to establish boundaries and expectations.

Financial conversations may be the toughest, but it’s important that everyone knows the plan from the beginning. If your child is working, then it’s totally fair to ask them to help contribute to rent. If you don’t expect financial contributions, then consider chores and other household responsibilities to reduce your workload and help your child feel like this is their home, too.

It’s important to keep in mind that over 80 percent of young adults live with their parents to save money, and that’s likely the case in your situation. Calculate how much it will cost for you to welcome your child back home and have a discussion with them about what they feel comfortable paying to find an agreeable amount. This is a great time to discuss financial responsibility and make sure that they’re paying down their student debt and saving appropriately.

You probably both enter this housing arrangement expecting it to be temporary, but you likely have different ideas of what temporary is. Make sure there is a timeline for your child’s stay and figure out a goal or date for when it’s time to say goodbye. For many, this is a savings goal, a new job opportunity, or just knowing they can afford to move out.

Otherwise, it’s important to find a balance between “your house, your rules” and recognizing that your child is an adult and paying rent. You may let them know it’s disruptive to come home late on the weekdays, but you can agree together that weekends are more flexible.

While you can’t control your adult child’s spending, you can set expectations that they won’t be taking on new debt or planning lavish vacations while living at home. The intention is for them to start their life on the right track, and ultimately you’re being generous by letting them stay at home to save when their room could be your new at-home gym. Take time to help them learn more about how to set an accurate budget so they can manage their finances when they do leave the nest.

There’s no doubt prospects for recent graduates are tough and may get tougher. With student debt reaching all-time highs, inflation, and rising unemployment rates, moving out is not an easy option for many young adults. The boomerang generation is embracing the comforts of home to plan for their financial futures and wait out the rainy days. How are rising prices impacting your family? Here is how one can calculate your private inflation charge