Serena Williams is going out in style.

The tennis legend and 23-time Grand Slam singles champion is likely hanging up her racket after playing in the U.S. Open in Flushing Meadows, N.Y., as she announced in the cover story for Vogue’s September issue. And she advanced to the second round on Monday night after beating Danka Kovinic of Montenegro.

The G.O.A.T. (Greatest of All Time) has also been a fashion icon who has used her clothing — on and off the court — to make statements throughout her career, and Nike’s
NKE,
-1.31%
chief design officer told the New York Times that she’s very involved in designing her tennis threads — including her swan-song ensembles. (Again: She’s on the cover of Vogue’s September issue.)

And Williams kicked off her farewell tour on Monday rocking a custom pair of PE NikeCourt Flare 2 sneakers featuring a diamond-encrusted Nike “Swoosh” and her initials, as well as gold lace deubrés (aka ornamental shoelace tags) bedazzled with 400 hand-set diamonds in black ceramic, which was created in collaboration with her Serena Williams Jewelry line.

Serena Williams’ latest look for the U.S. Open in Flushing Meadows was inspired by figure-skating dresses, the night sky, and her previous six Flushing titles.

Williams revealed the kicks fit for a Queen in her Instagram stories on Monday, describing them herself as “the most epic, flashy, amazing.”

“So these shoes are pretty amazing. Like, I can’t wear these though, right?” she said. “I need to let them just sit in this box in my bedroom somewhere.”

She paired those with a tennis outfit inspired by the competition dresses worn by figure skaters, including a bodice embellished with crystals that “alludes to the night sky at the tournament,” according to the Nike press release. The look also incorporates a six-layer skirt in a nod to Williams’ six previous U.S. Open titles. 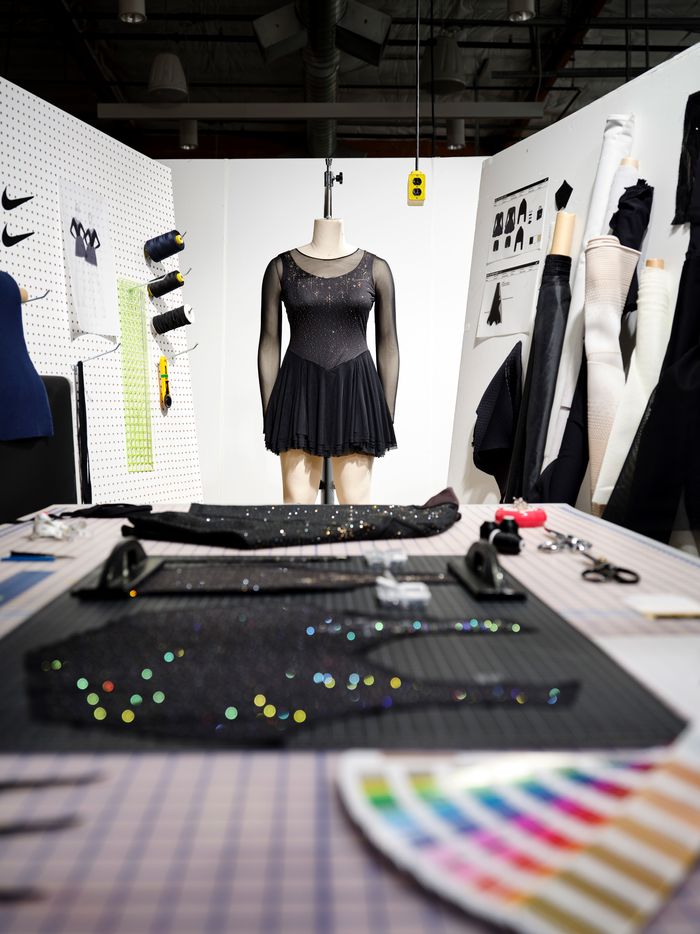 Serena Williams’ latest look for the U.S. Open in Flushing Meadows was inspired by figure-skating dresses, the night sky, and her previous six U.S. Open titles.

As the Nike statement explains: “Inspired by graceful competition dresses worn by figure skaters, the embellished bodice and the skirt place Serena in the spotlight and allow her freedom of movement. The skirt includes six layers, a nod to her six previous title wins in Flushing. With a matching jacket and tote, the deep hue and crystal-encrusted bodice refracts light and shines brightly, alluding to the night sky at the tournament.” 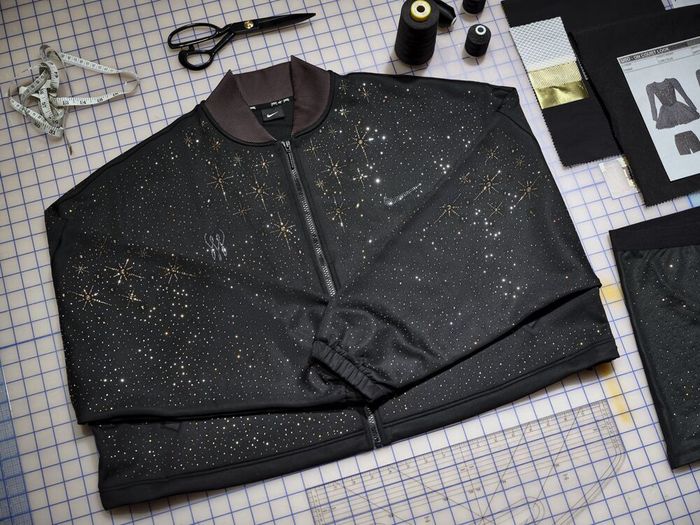 Serena Williams’ latest look for the U.S. Open in Flushing Meadows was inspired by figure-skating dresses, the night sky, and her previous six U.S. Open titles.

The U.S. Open will likely be Williams’ last tournament before “evolving away from tennis,” as she wrote in her poignant Vogue essay about her next steps. Williams, who turns 41 in September, isn’t giving up working for good; she plans to continue growing her venture-capital firm, Serena Ventures, as well as growing her family. She’s also got her first children’s book hitting shelves this fall.

But she’s approaching her retirement from tennis with mixed emotions, writing: “There is no happiness in this topic for me … I hate it.”

She enters the U.S. Open with a groundswell of support, however. Check out her entrance from Monday night:

“The reception was really overwhelming,” Williams told reporters, as reported by ESPN. “It was loud and I could feel it in my chest. It was a really good feeling. It’s a feeling I’ll never forget, so I really — yeah, that meant a lot to me.”

But perhaps no one was more pumped to see Williams play than her daughter Olympia, now 4, who was seen in the stands taking pictures of her mother. Olympia’s style was significant on Monday night, as well; she sported white beaded braids in a nod to the hairstyle that Williams wore when winning her first U.S. Open in 1999.

And after news that she plans to stop playing the sport professionally hit earlier this month, ticket prices to the tournament — and Williams’ match in particular — skyrocketed. Some tickets to her opening match on Monday night were selling for almost $1,000 on secondary markets.

And she certainly dressed the part. Financial report: US wholesale costs rose by nearly zero.2% in December, suggesting that top inflation could also be easing