While the management of Impac Mortgage Holdings remains bullish on its prospects for the non-qualified mortgage segment, its top executive said the current situation in the secondary market reminded him of another Russian-driven event over 23 years ago.

“Some of us were cutting our teeth in the business back in October of 1998 at the advent of the Russian debt crisis, which triggered a flight to safety rally in U.S. Treasuries and a concurrent sell off in credit based assets,” George Mangiaracina, Impac’s chairman and CEO, said on the company’s fourth quarter earnings call. “Especially finance companies at that time experienced losses and liquidity calls on their Treasury short hedge positions and also faced warehouse margin calls and market value declines in their subprime and alt-A mortgage loan portfolios.” That led several subprime lenders to abruptly shut their doors or shift their business model.

Now, as back then, the turmoil has affected the secondary markets and forced Impac to further fine tune its hedging strategy.

Over the last six months it has increased utilization of futures on Treasury notes instead of aggregating non-QM for bulk sale to private label securitizers. “We will continue to remain disciplined in our origination and capital markets activities and remain undeterred in our belief that the addressable market for non-QM will expand to our benefit, once markets normalize with respect to volume and margin,” Mangiaracina said.

Non-QM production was the bright spot for Impac in the fourth quarter. It reported higher overall volume on a quarter-to-quarter basis of $759.4 million, up from $682.6 million in the third quarter. But one year prior, the company did $810 million.

The non-QM product now makes up more than half of the total production, at $382.1 million for the fourth quarter, more than double the $186.2 million in the third quarter. Because the company resumed taking non-QM applications in the fourth quarter of 2020 after halting all production activity in March of that year, Impac only did $2.2 million of non-QM volume. 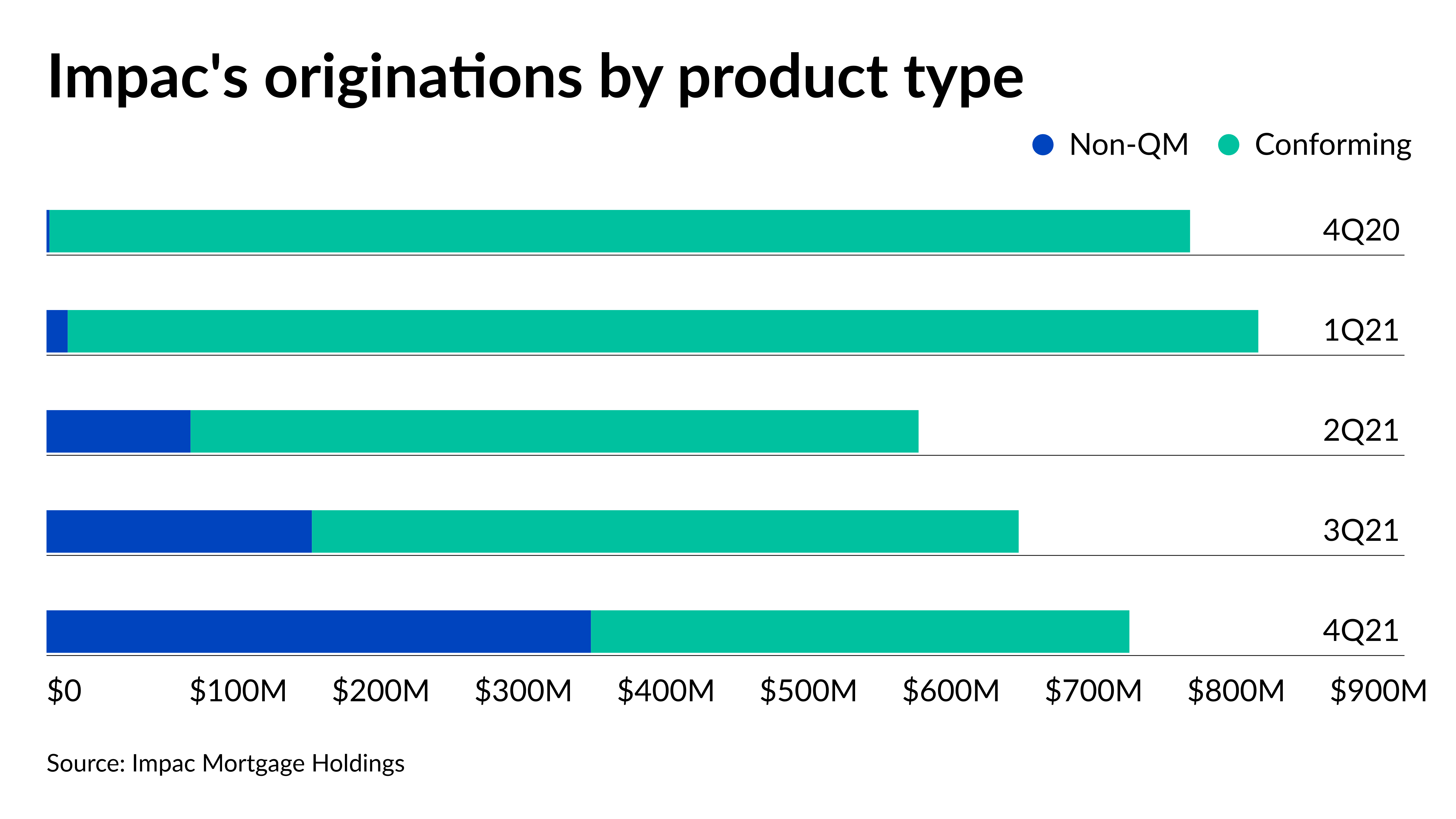 Impac reported $3.6 million in net earnings in the fourth quarter, but attributed that to the increase in the fair value of securitization residuals portfolio. It is the second consecutive quarter of profitability on a GAAP basis; Impac had net income of $2.1 million in the third quarter, but a net loss of $2.2 million for the fourth quarter of 2020.

But while Impac is bullish about its non-QM business prospects, its executives added that the company was forced to significantly raise rates on the product because of the secondary market issues.

Credit spreads for triple-A rated securities over benchmark rates widened during the fourth quarter from 65 basis points to 90 bps at the end of the period and are now at 160 bps, said Obi Nwokorie, chief investment officer.

“The rise in credit spreads occurred as we saw increased volatility in the broader markets, but this widening was also a reflection of a supply demand imbalance in the non-QM sector, with supply outstripping demand during the fourth quarter,” Nwokorie said. “Investors also began to focus on extension risk for lower coupon mortgages.”

Even so, Impac shifted its call center’s activities from doing primarily conforming loans to non-QM. “By leveraging the sales and marketing expertise that was so successful in ramping up this product previously, we’ve compressed the timeline significantly in shifting product composition within the retail channel,” said Chief Operating officer Tiffany Entsminger.

But even with the growth from the call center’s production to $129 million from $53.5 million in the third quarter, Impac gets the bulk of its non-QM production from mortgage brokers. Wholesale was responsible for $253 million of non-QM originations in the fourth quarter, up from $186.2 million.

Furthermore, Entsminger said, as of today, non-QM production represents 62% of Impac’s pipeline, versus 35% when it did its third quarter earnings call in November.

At the same time, there’s another source of non-QM loans that Impac is not tapping right now. “The third party originations channel has still not fully relaunched the correspondent division,” said Entsminger. “There’s additional opportunity to capture market share and drive volume through delegated and non-delegated correspondent business relationships in the future.”

Impac has also shifted where it spends its marketing dollars to attract call center customers to focus almost entirely on bringing in non-QM borrowers.

Managing Impac’s headcount was another topic of discussion on the call, especially because its conforming volume was down 23% on a quarter-to-quarter basis. While the company did not provide a specific number, it said it is managing headcount to its origination capacity.

“And then a topic that continues to come up in terms of trade publications that you read all the time is reduction of headcount at some of the larger institutions out there, and that’s not something that we’re immune from either,” said Justin Moisio, chief administrative officer. “But the difference here is that our folks know how to originate alternative credit and GSE products from years of being cross-trained on that.”