With the kind support of México Desconocido

Besides being extremely rich and diverse, Mexican gastronomy never stop reinventing yourself. Proof of this are those Dinoquesadillas . These are delicacies made from Nixtamal and filled with cheese that have changed the way we eat Quesadillas and created by Jesus Abraham Padilla , a young man from Coahuila.

In an interview with Unknown Mexico, Abraham told us that this successful and viral idea, although the result of the occurrence of the moment, was possible thanks to the support of his friends and family. Here we tell you the story!

Who is Abraham and how did you come up with the idea of ​​reinventing the traditional quesadillas?

Abraham Padilla is originally from Saltillo and grew up in San Antonio de las Alazanas (City of Arteaga, Coahuila). He is a 28-year-old chef who for a large part of his life has managed to develop and professionalize himself in the gastronomic sector. In fact, it was his mother who introduced him to this world.

And the fact is that Ms. Verónica has been running the family business for about 14 years: a small restaurant serving Mexican snacks known as Doña Vero – the place is in the same town as San Antonio. Here, locals and travelers alike will find delicacies such as gorditas, tamales, buñuelos, asado dishes and much more.

In this way, Abraham learned all the secrets and cooking recipes his mother knew. He later found his true calling in the culinary world. So he decided to work in different restaurants in the region to expand his knowledge. Thanks to this, he was introduced to international cuisine; However, his specialty is still mexican cuisine .

More than friends, a second family

It should be added that in the kitchen Abraham found not only his passion, but also true friends. And the fact is that in the restaurant he is currently working at, this creative chef found people who supported him and who believed in him so much that he already considers them his second family.

As Abraham told us, it is actually his friends who spread his work and share it on social networks. Dinosaurs were no exception. And although he created these in his spare time – while he was preparing to eat and embodied his passion for dinosaurs in a Molote – he never thought his creations would go viral.

Thanks to that, and without even planning it, the economy of Abraham's family – which has been badly affected by the pandemic – has managed to recover and Abraham found himself overwhelmed by the demand and asked them to reproduce the dinoquesadillas in Doña Vero . In view of this, and as always, his family did not hesitate to support him.

Beyond the dinoquesadillas, an attempt to defend the region's gastronomy

Although the Dinoquesadillas brought an unexpected and unprecedented success for Abraham and his family, it is Chuy's dream – as they affectionately call him – to have his own restaurant and thus claim and spread the cuisine of the Northeast because it is so rich is wrongly forgotten. 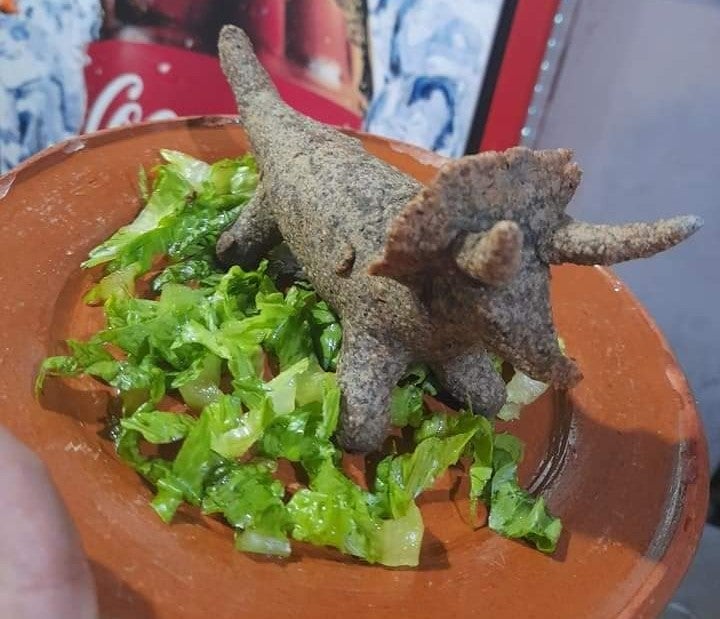 How much do they cost and where can you find these delicacies?

Due to the high demand for dinoquesadillas, Abraham and his family have hired more people to help them complete their assignments. Hence, the cost of these delicious snacks has increased 20 MXN per quesadilla to 100 MXN for three .

The types of dinosaurs also include the exquisite Triceratops and Tyrannosaurus Rex. To request your orders, you can visit the Doña Vero store (on Reynaldo Nuncio Street in San Antonio de las Alazanas in Arteaga, Coahuila) or contact Abraham directly on Facebook.

If you want to try these gastronomic delights while promoting creativity and the local economy, be sure to go to Coahuila and take the opportunity to discover the charms of the area.